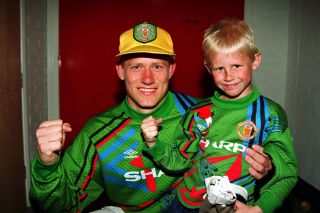 According to reports, Manchester United have an eye on Leicester City’s Kasper Schmeichel, the son of former goalkeeper Peter Schmeichel.

It is suggested that United are worried about their situation between the sticks and the Leicester keeper is on their target list.

The Sun claim Ole Gunnar Solskjaer is turning his attention to the 33-year-old which would put David de Gea’s future in more doubt.

Moreover, I’m sure this move would have Dean Henderson ask a few questions about his own future at Old Trafford. After an outstanding season at Sheffield United in the top flight, the young English goalie is being tipped as United’s future No.1. I wouldn’t expect him to sit and wait around forever.

De Gea has endured another difficult season which had left his position in the team under scrutiny, and with Euro 2021 taking place next summer, Henderson knows he won’t get selected if he’s not playing games next term. The Spaniard won’t want to be dropped from the Spain squad either.

So, Solskjaer has a lot of decisions to make and I’m not sure signing Kasper Schmeichel will fix anything.

Let’s not forget Sergio Romero who has never let the club down, although the Metro claims Everton and Leeds United want to sign the Argentina No.1.