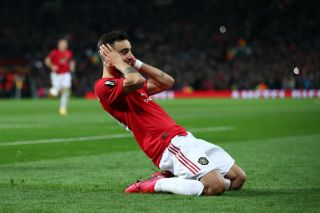 Manchester United’s Portuguese Magnifico has explained his young daughter is the catalyst behind his goal unique celebration.

United fans have been treated to seeing the attacking midfielder celebrate scoring  after he has netted a total of 10 times so far this season since his arrival from Sporting Lisbon in January.

The 25 year old’s trademark goal celebration is one which sees him run to the corner of the pitch, slide on both knees and put both hands over his ears.

Until Fernandes revealed all in an exclusive interview on ManUtd.com, fans had no idea what the celebration symbolised.

However, Fernandes has now explained his daughter’s influence is the reason behind his goal celebration, the creative midfielder said: “This is a long story!

“In Portugal, when I was playing, and I started my second season in Sporting, my daughter was growing up, you know.

“I need to talk with Sky because, every time I did this, it never comes [out] so, all the time, when I call her after the game she tells me – you don’t do it!

“Now she knows every time I do that for her. In the beginning, she didn’t know but now she knows, every time, it’s for her.