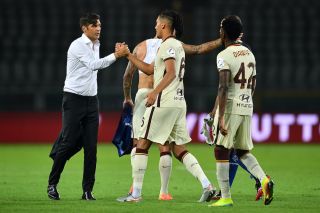 Although Roma have had months to negotiate a deal with Manchester United over Chris Smalling, reports in Italy suggest there’s a difference in opinion when it comes to the centre-back’s valuation.

According to Gianluca Di Marzio in Italy, Roma does not want to go beyond a paid loan costing €3m plus a €12m buy option, while United are demanding at least €3m plus €15m bonuses.

The report stresses that Roma and United are not yet close on an agreement, which surely puts the move in doubt when you would think a year down the line from when he joined them on loan they’d have made a decision by now.

Roma have until August 3 to submit their squad list for their Europa League tie against Sevilla. Talks with United hold the key to his eligibility for that tie, so they need to make a move if they want him that soon.

United are not the ones stopping Smalling from moving on and I wouldn’t even go as far to say they’re pricing him out of a deal. The differences are not as ‘far’ as Gianluca Di Marzio makes out either… a mere €3m which in football terms is nothing.

Moreover, United don’t need to worry about Smalling like they do with other players they are trying to sell this summer. He had a very good campaign in Serie A and there shouldn’t be any shortage in interest for his signature.