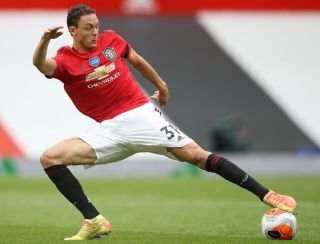 Manchester United defensive midfielder Nemanja Matic has highlighted his personal ambition to lift the Premier League title with the club he has been with since 2017.

Surprisingly, Matic has failed to lift a single trophy since his time at United with his biggest achievement coming as an FA Cup runner up in 2018.

Despite a confidence boosting season this season, finishing third in the league table, it is important to remember that runaway title champions Liverpool and geographical rivals Manchester City finished 33 and 15 points above United.

Nevertheless, after enduring an impressive season, one more reminiscent of the United of old, fans are growingly increasingly confident that they may not have much longer to wait to see the Reds be crowned Premier League champions once again.

However, speaking directly to Manchester United’s new official magazine Inside Red, Matic has highlighted his personal ambition as well as set the standard for the rest of squad ahead of next season’s campaign.

The 31year-old midfielder is adamant that at the very least that margin of points should not happen again and that the league title should never be decided as early as it was this campaign after Liverpool secured their first ever Premier League title with seven games to go.

Matic told the club’s official magazine Inside Red, as quoted on ManUtd.com: “Me, personally, I would like to win the Premier League with Manchester United.

“I think that our club always needs to fight for the title.

“We always need to try to do the best for this club, which we are doing at the moment, and I think we cannot allow any club to win the league seven or 10 games before the season finishes. So we have to fight until the end.

“Of course, we have a young team, but this cannot be an excuse. I think these young players already have a few seasons behind them playing. So, from the next season, we have to fight for the title. I don’t know if we’re going to win [it] but I’m sure that we can fight until the end.

“That’s my personal target and I think the rest of my team-mates think the same.”

Fans will be excited to see one of their most experienced squad members is adamant the side can fight for next season’s title.