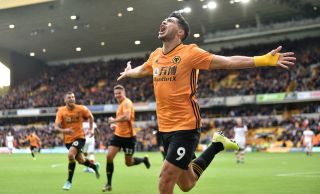 Manchester United have reportedly insisted that reports earlier this week which suggested the Reds were on the verge of securing Wolves front-man Raul Jimenez are ‘inaccurate’.

The footballing world was left stunned on Friday after Portuguese outlet RTP, published an astonishing report which suggested Portuguese side SC Braga has sold Paulinho to Wolves and that Jimenez was set to depart for United.

Jimenez has endured a highly impressive season having bagged 33 domestic goal contributions in just 37 games which has been the driving force behind intense speculation that the Mexican could move on from his Midlands side this summer.

As claimed by Sports Witness, any proposed move for the prime striker would cost a fee in excessive of £70m and with United seemingly in the hunt for £100m rated Jadon Sancho, as per The Times, it is extremely unlikely that fans can expect to see their side splash the cash on Jimenez.

However, despite the ambitious claim that Jimenez was set for United, Manchester Evening News have recently reported that the club have confirmed that there is nothing in the reports which suggested Jimenez was on his way to join up with United.

MEN have said that it is their understanding that any report suggesting Jimenez is set to leave Wolves for United are ‘inaccurate’.