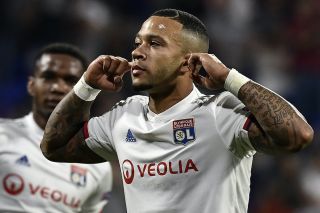 Lyon chief Juninho confirmed that Manchester United have priority to re-sign Memphis Depay should they opt to bring the Dutch winger back to the Premier League but has confirmed there has yet to be any contact for the attacker.

Memphis famously joined the Reds back in 2015 from Dutch side PSV in a move which cost United a reported £30.6m, as per TransferMarkt.

The young attacker’s time in Manchester failed to take-off after he only managed to net seven times in 53 appearances before he was eventually sold on to Lyon two years later.

However, in a period of time which sees the Reds reportedly desperately seeking a new winger with Borussia Dortmund’s Jadon Sancho believed to be the number one target, speculation is mounting that Dortmund themselves could be tempted to lure United cast away Depay to the Signal Iduna Park as per German outlet Bild.

Lyon chief Juninho confirmed last year that United have first refusal on Depay therefore shall be notified should Dortmund launch a formal bid for the 26 year old which could signal the go-ahead for the Reds to ramp up their efforts of securing number one target Sancho.

As quoted by Manchester Evening News, Juninho said: “It’s true that Manchester United have a priority to buy back Memphis.

“These things exist in football. But until now, we’ve not received anything on Memphis.

“Each time there’s only a year left on a contract, the conversation over a renewal becomes rather difficult. But I think that he’s really happy in Lyon at the moment.”

Elsewhere, Sassuolo winger Jeremie Boga is being considered as a potential replacement for Sancho by the Black and Yellows, however, Italian giants Napoli are believed to be leading the race for Boga after launching an official €22m bid earlier this week, as per CaughtOffside.