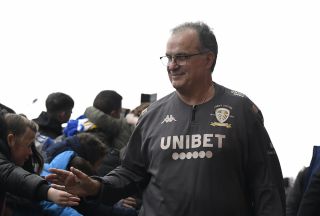 Leeds United’s 16-year wait back to the big time is over after it was confirmed earlier this month they had secured automatic promotion from the Championship. The Yorkshire outfit are now preparing for life back in England’s top flight after a near two decade hiatus and are reportedly looking to bolster their squad in a window which could see them sign as many as five players.

According to The Athletic, one of those five players Leeds boss Marco Bielsa is rumoured to be considering is Manchester United back-up keeper Sergio Romero.

It is suggested that Bielsa is looking at alternative goalkeeper options after ex-Real Madrid keeper Kiko Casilla was handed an eight game ban for on-field racial abuse.

Romero’s future has been cast into doubt after manager Ole Gunnar Solskjaer opted against starting him in this season’s FA Cup semi-final against Chelsea earlier this month.

As reported by The Sun, the Argentinian is believed to be demanding ‘showdown talks’ with the club he has been with since 2015 as Leeds watch on with hope that they may be able to snatch the Argentinian international from under their rival’s nose.

When asked about specific targets, as quoted by Express, Leeds’ Head of European Recruitment Gaby Ruiz said: “I can’t anticipate anything.

“It’s because during the confinement we didn’t know what was going to happen and we generated many lists with many options and names for different positions.

“Now, we’ll try to bring to fruition the players with preferences to strengthen the team.”