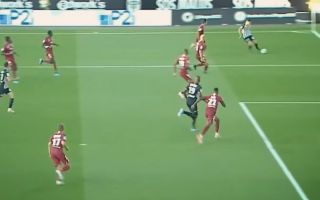 Rayan Ait-Nouri has been linked with Manchester United today, with the Angers teenager a target according to French publication FootMercato.

Below, you’ll see a compilation of Ait-Nouri’s assists and skills — in which I found impressive for a young left-back — and a player I could see Ole Gunnar Solskjaer having an eye on as he likes to get forward and show his pace.

He can also dribble with it, arguably better than Luke Shaw and Brandon Williams can, and seems bullish enough to never give up on the ball. There are moments of sloppiness in the video but Ait-Nouri seems terrier esque in his approach to win back possession.

That might help explain why Man City boss Pep Guardiola wants him, also claimed by FootMercato…

It’s difficult to judge a player on highlight clips. For instance, you don’t see much defending in the one below.

I’ve got a sneaky feeling there could be something in these links.