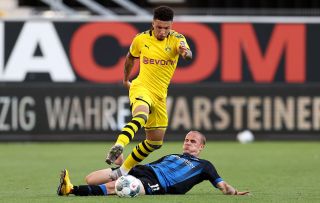 According to ESPN, the Norwegian boss wants to avoid another dragged out saga like Harry Maguire last summer, in which the Reds paid a world record £80m for the Leicester defender.

Apparently United feel they can dive down Borussia Dortmund’s valuation of the player because they are not rivalled by another club in the hunt for Sancho’s signature.

The report suggests Ed Woodward, United’s executive vice-chairman, is prepared to offer £50m due to the financial impact of the coronavirus pandemic on the transfer market. However, thankfully it seems someone at Old Trafford knew such an offer would be a waste of time and coaching staff want the club to make a more realistic opening offer.

In order words, Solskjaer and his staff want a deal done as soon as possible. No messing around!

United don’t want a repeat of the Maguire show. It took far too long and we ended up paying well over what our initial valuation of the player was…

Leicester stood firm last season and set a price. It might not be as easy for Dortmund to do that this season, but I have no doubt in my mind that they will try to play hardball when push comes to shove.