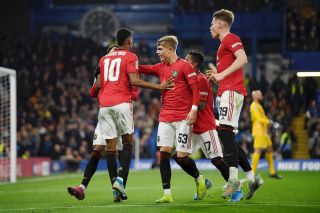 Manchester United stars Marcus Rashford and Brandon Williams have been selected in WhoScored’s U21 Premier League team of the season.

The team comprises of players that started the season aged 21 and under and is based on average ratings.

Rashford is completely deserving of a place in this XI after enjoying his best goal-scoring season in a red shirt.

The England international netted 22 goals in all competitions, despite spending months sidelined with a double stress fracture in his back.

It’s easy to forget how totemic Rashford was for an inconsistent United in the opening months of the campaign; the academy graduate led by example and was one of the most in-form forwards in the world at one stage.

His form inevitably dipped after the restart as he came back from a long-term injury, but he still delivered an excellent performance against Crystal Palace in the league which helped ensure Champions League qualification.

Meanwhile, the emergence of Williams as a first-team regular has been one of the highlights of Ole Gunnar Solskjaer’s first full season in charge.

United seemingly had no plans to promote the teenager this season after he missed out on the squad for the pre-season tour of Australia and the Far East.

But he grasped his opportunity brilliantly after Luke Shaw’s early injury and has provided healthy competition for the left-back ever since, making 17 Premier League appearances.

Mason Greenwood is perhaps unlucky not to feature in this side after scoring 10 goals in his first full league campaign, despite only making 12 starts.

The 18-year-old would surely have been included if he had started more games, and consequently scored even more goals.

See the team that also includes four Chelsea youngsters below, courtesy of WhoScored: