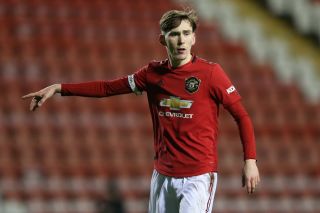 While we seem heavily focused on incomings at Manchester United, we’re also on the lookout for updates on players leaving the club whether it’s on a permanent basis or on loan.

According to GOAL, Manchester United are preparing to send up to four U23 players out on loan before the start of the new season.

Midfielder James Garner, who scored the Premier League 2 goal of the season, has allegedly attracted interest from Swansea City and Sheffield Wednesday.

There is a lot of competition in midfield at United, so it makes sense to send him out on loan to gain some valuable first team experience.

Another name mentioned by GOAL is Dylan Levitt. He was on the brink of making his Wales international debut before COVID-19 struck, and we understand United legend and Wales manager Ryan Giggs is a big fan of the youngster. He could benefit from a season in the Championship.

Young goalkeeper Matej Kovar is also ready to go out on loan, while a decision on Ethan Laird has yet to be made. The latter is definitely ready to be a regular at an EFL club.

Updates when we have them!