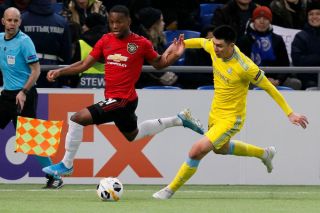 The evolution of academy graduates Mason Greenwood and Brandon Williams into first-team regulars is one of the highlights of Ole Gunnar Solskjaer’s first full season in charge of Manchester United.

Solskjaer understands the importance of giving opportunities to young players and it will have been particularly pleasing to see two teenagers grasp their chance.

And United’s youth system isn’t short of talent with plenty more equipped to eventually make the step up to the first-team squad.

Ethan Laird is one of the players promoted by Solskjaer this season, with the young right-back making two Europa League appearances this term.

Laird, 18, has been training with the first-team squad since the restart along with fellow academy stars Teden Mengi and James Garner.

And Laurie Whitwell from the Athletic believes Laird could be the one who is most likely to step up and challenge Aaron Wan-Bissaka for a first-team spot.

The progression of Laird into the first-team setting would mean United have an abundance of full-backs and hand Solskjaer a transfer dilemma.

Left-back is not a prime area of concern that needs addressing in the summer window, with Brandon Williams providing healthy competition to the indispensable Luke Shaw.

Timothy Fosu-Mensah was brought in from the cold to play against Crystal Palace when both preferred options were injured just three days earlier.

Fosu-Mensah did not embarrass himself on his first United start in three years, but he is very limited and not someone that can be consistently relied upon at full-back.

The Dutch youngster could be kept as a versatile squad player with his ability to play at centre-back and defensive midfield. But we are yet to see the quality of a player that had promised so much in the academy and his proneness to injury is an obvious concern.

We don’t think the fanbase would be too disappointed to see Fosu-Mensah leave this summer if Solskjaer decides he is surplus to requirements as he looks to accelerate his rebuild.

Meanwhile, the consistency and flawless defensive performances of new signing Wan-Bissaka has meant Diogo Dalot has spent almost all of this season watching from the sidelines.

Dalot has had his own troubles with injury and will be frustrated at not being able to challenge for a first-team spot this term.

The selection of Fosu-Mensah as he was overlooked in the league game against Palace would have come as a crushing blow, and he will surely be considering his long-term future as he has fallen out of favour with Solskjaer.

According to ESPN, Barcelona have shown an interest in signing the Portugal youth international this summer.

Laird has long been recognised as a potential first-team player at United but his progression could prompt the exit of two other young players.