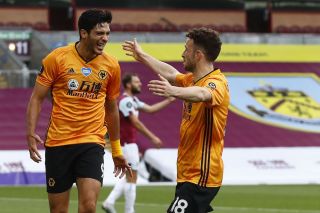 Wolves striker Raul Jimenez is being heavily linked with a move to Manchester United this summer. A report from Portugal this week via RTP claims the Mexico international is ‘on his way’ to Old Trafford.

Paul Merson wrote in his Sky Sports column this week that Harry Kane would make enough of a difference to see United challenge again. It’s a bit far-fetched because I don’t see United going for the England captain this summer.

Anyhow, former Chelsea defender and talkSPORT presenter Jason Cundy believes Jimenez would be a good signing for United, saying he’s ‘in the same bracket as Sergio Aguero and Harry Kane’.

“He is too good for that Wolves side,” Cundy said on the talkSPORT radio. “Is he a Champions League player, yes or no? If the answer is ‘yes’ then he has to be thinking bigger and better right now.

“I don’t doubt that Wolves are going in the right direction, and they don’t have to sell him, but I’m talking about the individual. Wolves are a brilliant side but sentiment does not come into it.

“He is a wonderful football player. He is in the same bracket as Sergio Aguero and Harry Kane — he is that good.

“If I was Ed Woodward, go and get him. You can’t get Kane right now. Kane is going to be tough and he’s had injury problems.

“Can you imagine getting Jimenez in a side that could potentially create more problems?”

Although Jimenez has had another brilliant season — scoring 13+ goals each of his first two Premier League campaigns.

Cundy reckons in a side like United’s that is getting better and better, Jimenez will be able to feed on more opportunities to rival other top strikers for the golden boot award.