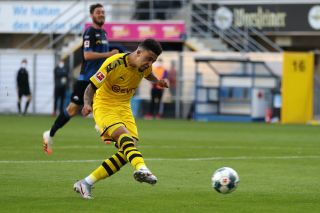 Retired footballer turned broadcaster and reporter Jan Aage Fjortoft often has an inside track when it comes to transfers to and from the Bundesliga. We think his updates carry weight so his tweets today are certainly of interest.

With Sky Sports reporting United are confident about a deal for Jadan Sancho, there’s a growing belief among Reds that something will be agreed before it’s too late. The Independent claim an agreement is likely to be paid with £60m up front and another £60m in instalments.

That seems pretty fair, but reports now suggest that £60m initial fee agreement are not true.

Norwegian reporter Jan Aage Fjortoft says Borussia Dortmund have set a deadline for August 10 and that no offer has been made for the England international.

However, he goes on to stress that Dortmund want £120m for Sancho and instalments are being discussed.

There’s a nice bit in the tweets when Fjortoft shares his verdict on the prospect deal and says it’s likely that Sancho’s next club will be Manchester United.

Reports in England saying that Man UTD have made a deal with Dortmund of “60 million Euro initial fee plus installments” are Not True.

– no offfer on the table
– deadline 10th of August

No agreement YET. Total amount 120 mill euro. Negotiations around how high initial fee/how many installments/ over how many years

But I understand that:

VERY likely that his next club is Manchester United

From this, I can only gather that even if the Independent’s report is a bit premature something is happening behind the scenes. United are going for Sancho and their prime transfer target this summer, as we expected going into the transfer market.