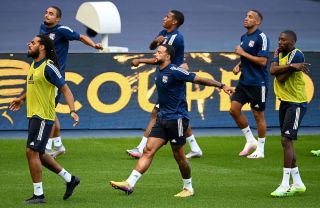 It wouldn’t be the worst move for the Bundesliga club – they’d be getting a talented attacking player who has got his career back on track. Depay enjoys the spotlight and he’ll get that in the Black and Yellow of Dortmund.

According to German publication Bild, Depay is eager to move on from Lyon this summer and could be available for £40m. Again, that doesn’t sound like bad business to me.

Dortmund may be about to lose their biggest asset but Sancho clearly wants to leave, they’ve already added Jude Bellingham to their squad and Erling Haaland is their next big thing, or should we say project?

Memphis Depay left United three years ago having failed to establish himself in the first team after arriving with tons of promising after a prolific campaign at PSV Eindhoven.

He played under Louis van Gaal and José Mourinho and it didn’t work out under either coach. During his final season at the club he started just one match, against Northampton in the EFL Cup, before leaving in January.

Sky Sports claim Manchester United are confident over a deal for Sancho. The Independent claims an initial fee of £60m has been agreed on… So, what is there left only for Dortmund to find their Sancho replacement?

These reports may be exciting but I must warn there’s very little point until Sancho has signed the dotted line for Manchester United. Anything can happen in transfer negotiations and United should be looking to get this done as soon as possible.