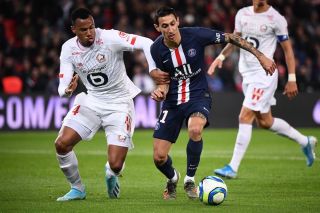 Ole Gunnar Solskjaer needs to sign a centre-back this summer who can provide competition to favoured pair Harry Maguire and Victor Lindelof.

Marcos Rojo and Phil Jones are finally expected to leave Old Trafford this summer and the reliability of Eric Bailly and Axel Tuanzebe has also been questioned due to their extensive injury problems.

According to Sky Sports, Gabriel, 22, ticks the boxes of a central defender Solskjaer would look at acquiring the ssummer.

The Brazilian impressed in Ligue 1 this term, making 24 appearances and helping his Lille side to a fourth placed finish before the April curtailment due to coronavirus.

Sky Sports note that the youngster fits United’s profile of being young, affordable and having plenty of potential.

It is believed United could sign the centre-back for around £20m this summer which would represent a relatively low risk transfer given how highly he is thought of in France.

Gabriel is left-footed and is confident in playing the ball out from defence.  It’s clear to see why United are credited with an interest in the talented defender, but they will not have a free run at his signature.

Sky Sports’ report claims that Everton, Paris Saint-Germain and Napoli are already embroiled in a battle to sign Gabriel.

But United could surely lure Gabriel to Old Trafford with an enticing offer if they feel he can seriously improve Solskjaer’s current squad.

We feel that any defensive incomings will largely depend on how many surplus defenders Solskjaer can offload this summer.