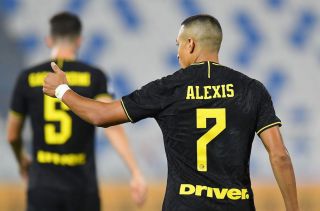 Alexis Sanchez’s Manchester United nightmare could soon be coming to an end.

Forgotten man Sanchez has spent this season on loan at Inter Milan after a dismal first 18 months in Manchester.

The Chilean forward has not fared too much better in Italy either, with injuries halting any real progress or rediscovery of his prime form.

But he has finally found some form since the restart, scoring three times and registering a further seven assists.

And according to the Manchester Evening News, Inter are now confident of signing Sanchez on a permanent basis in the summer transfer window.

It is claimed transfer negotiations between United and Inter are advanced stage meaning there is a good chance the deal could go through.

This would surely be a relief to Solskjaer to get a player like Sanchez off the books as the 31-year-old represents the antithesis of the kind of player he wants to focus his rebuild around.

As reported by BBC Sport, Borussia Dortmund forward Jadon Sancho is a leading transfer target for United this summer.

And the MEN note that the sale of Sanchez could give United ‘leverage’ in their pursuit of the England international.

Sanchez is said to be on a staggering £400,000 per-week at Old Trafford, and his likely exit would free up plenty of funds for the club to force the issue with Dortmund in their Sancho pursuit.

Sancho made 33 goal contributions in just 25 Bundesliga starts this term and could complete one of the most exciting attacking quartets in world football with Marcus Rashford, Anthony Martial and Mason Greenwood.