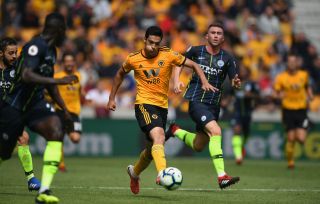 Portuguese broadcaster RTP have an intriguing news update that has sparked a lot of conversation among Manchester United fans on social media.

They claim Raul Jimenez is ‘on his way to Manchester United’ and our friends at Sport Witness add to their cited report that they are not usually prone to gossip.

Wait a second, what?

There had been whispers about this being a prospect deal midway through the Premier League, but considering what’s happened since then and our alleged £140m transfer kitty, as per The Sun, does it make any sense to spend an excessive amount on a 29-year-old backup striker?

United want Jadon Sancho and The Independent claims a deal with Borussia Dortmund has moved closer. Most fans will argue a centre-back is needed — and a very good one at that. So where is the money going to come from for all of this?

We don’t find it easy to shift players. Our record at that is actually quite poor.

The same report from RTP suggests Wolves have already found a replacement for Jimenez in Braga’s Paulinho, who has 25 goals and nine assists in 48 appearances this season.

Check out what Reds had to say on Twitter about Wolves striker Jimenez.

Hard to swallow because Jimenez is great, but there’s a lot of truth in this. It would be reckless business to spend £50 million on a 29-year-old backup striker https://t.co/riW5jDHIrT

We need him not Jiménez pic.twitter.com/Ag4oED4XdL

Would be an excellent signing – perfect short term, high quality signing that bridges the gap for Greenwood.

Imagine if this is actually true 😂