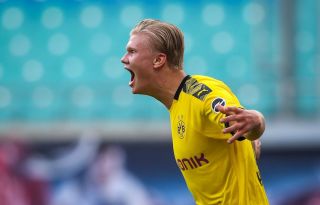 Borussia Dortmund forward Erling Haaland has issued a ‘hands-off’ warning to Manchester United and Real Madrid by pledging his future to the Black and Yellows.

United were reportedly close to securing the 20-year-old at the beginning of the year before he opted to join German outfit Dortmund.

The Norweigan striker has endured a fantastic start to life in the Bundesliga, scoring 16 goals in just 11 domestic starts.

It has been widely suggested that Ole Gunnar Solskjaer has kept his young compatriot on his radar, however, recent reports confirm that Haaland wishes to stay at Dortmund for the foreseeable future.

According to Bild, as quoted by Daily Mail, Haaland said: “I have a long-term contract here until 2024. In any case, it is my big goal to win BVB the title and to celebrate fantastic successes with our fans.

“We have the quality to become champions but talking alone is not enough. Bayern have distinguished themselves by their incredible consistency.”

Although United look set to miss out on Haaland, the Reds have been offered more hope in their race to secure fellow Dortmund star-man, Jadon Sancho.

According to reports yesterday by Sky Sports News, United are ‘growing increasingly confident’ of being able to lure the 20 year old Englishman away from Germany and to Old Trafford.