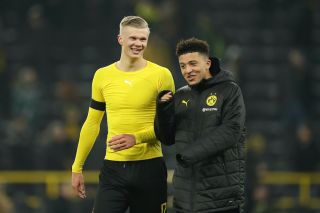 Manchester United are currently the only club in for Jadon Sancho, despite well documented interest from Liverpool and Real Madrid in recent months.

According to the Independent’s Miguel Delaney, Borussia Dortmund are willing to agree on an initial fee with Manchester United, so you could say a deal has moved closer. Delaney adds some context to to the long-standing interest from Liverpool and Madrid, which makes you think this is United’s best chance to get a player in they really want.

Although, as noted in the article, all talks regarding the prospect deal are still between intermediaries, and that there are no formal negotiations between the clubs yet.

That will take a call from either Ed Woodward or Matt Judge. I’m sure a lot of negotiations will be done over conference call this summer, probably more than ever before since we’re in the middle of as global pandemic, so it would be a good time for United to act on Sancho.

The report also claims Dortmund will accept an initial £60m, for a package that ultimately rises to over £100m. It sounds like Delaney has been given the same information as Daniel Harris of The Guardian, as seen below — posted on Twitter last night:

“Daniel Harris understands” that Jadon Sancho to Manchester United is close. The clubs have agreed a fee, €60m up front and €60m in installments, the structure of which they’re now negotiating.

At least Dortmund are willing at these early stages. That tells me they are will at this point to sell their most prized asset. They probably want to avoid a dragged out saga and ensure they’ve got enough time and funds to buy a replacement.

Time will tell but I’ve got a good feeling about this.