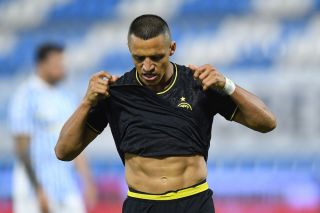 Manchester United outcast Alexis Sanchez has told the club he wants to leave on a permanent basis despite manager Ole Gunnar Solskjaer still believing the Chilean has something to offer the Reds.

Sanchez has spent the season on loan with Italian giants Inter Milan and is believed to be wanted in a permanent deal, as per BBC Sport.

Despite a patchy start to life in Italy, Sanchez has since been able to recapture his best form by helping his side rise to second in Serie A with 10 goal contributions coming in just his last nine appearances.

The 31-year-old is expected to return to his parent club on August 7 when his loan ends, however, Sanchez has told United that he wants a permanent move away from the club.

It was believed that Solskjaer still had Sanchez in his first-team plans, as per Daily Star, however, the player now looks determined to leave his Old Trafford nightmare behind him.

A source reportedly told the Daily Star: “Alexis doesn’t see the point in going back to Manchester. He’s happy where he is. It just didn’t work out for him at United and wants the club to accept that he wants to leave.”