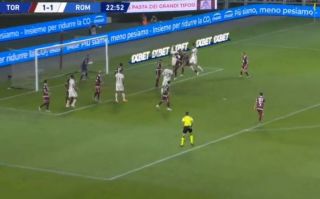 Manchester United on-loan defender Chris Smalling has continued his impressive resurgence in form by helping his current side AS Roma regain the lead in their Serie A match against Torino.

The Englishman, who was loaned out to Italy on loan at the start of this season, has endured a largely impressive campaign having scored two goals before netting his third just moments ago.

Smalling has started 26 domestic games for AS Roma and seen his form help his side secure a vital six clean sheets which sees them sit fifth in the Serie A table.

Smalling’s latest goal came in the 26th minute after raising above the Torino defence and directing home a towering header.