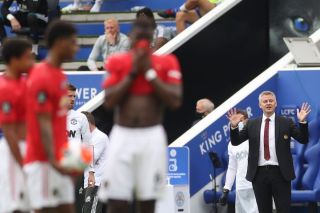 Ole Gunnar Solskjaer wants to ‘go for it’ after his first full season in charge of Manchester United.

The Norwegian has led Manchester United back into the Champions League with a third place finish in the Premier League. In doing that, Solskjaer has turned the club around and there’s a genuinely pleasant atmosphere around the club for the first time since the days of Sir Alex Ferguson.

Fans ought to be wary over whether the Glazers will back Solskjaer in the transfer market. We already know COVID-19 is going to have a financial impact on the market, but The Sun claims the manager has told the club’s board: Let’s go for it.

That’s because Solskjaer is convinced they can make a run at the Premier League title next season. His ambition deserves to be admired; already making it clear to the press that his journey with United doesn’t stop with a third place finish in the league and there’s work needed to be done in order to catch Liverpool and Man City at the top of English football (via The Guardian).

Everybody knows after qualifying for the Champions League, United have a better chance of getting the best players to help them achieve their ambitions. Ed Woodward needs to act accordingly. Zero incompetence allowed.

Neil Custis at The Sun claims Solskjaer wants Jadon Sancho, a midfielder and a full-back.

While United will try to sell a few players, Solskjaer reportedly has a transfer kitty worth £140m which would make it hard to justify spending big on a squad player, as per The Independent.

There’s also a mention of Leicester’s Ben Chilwell in the article, with a suggestion he is on United’s radar.