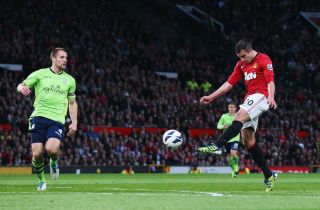 Manchester United legend Robin van Persie has reminisced of life at Old Trafford after his famous first-half hat-trick against Aston Villa which helped the Reds secure their 20th league title in 2013.

Speaking to ManUtd.com, the Dutch legend relived the famous game against Villa which featured his iconic volley which was provided by Wayne Rooney’s pin-point perfect pass.

Van Persie highlighted how it wasn’t until well after the game that he finally realised the true magnitude of his contribution after dragging his side over the line in a bid to secure the Red’s record breaking 20th league title.

The former Dutch international said: “I was so in the zone. I was so focused. Everyone was and we just wanted to get it done.”

Acknowledging how times are somewhat different now to how they were seven years ago, Van Persie highlighted how he remained away from social media during his side’s title charge, he said: “In that period, I wasn’t on social media so I didn’t really get what was going on around me. I was in this bubble, I was focused and I just wanted to win.

“Afterwards, a colleague showed me the volley and I was like ‘oh, nice one!’ We went to have dinner and then partied a bit. I didn’t realise it [was so big].

“Now, for example, if you score a nice goal you see it everywhere – on Instagram, Twitter, everywhere.

‘So from my point of view, it was different because I wasn’t really involved in social media, I was just living in that moment so much and I was really enjoying the moment.”

The ex-United legend made special reference to arguably his most iconic moment in a United shirt as he hailed the deciding match against Villa as a ‘perfect ending’, he said: “It was a fantastic day to score a hat-trick and a perfect ending for that season.”