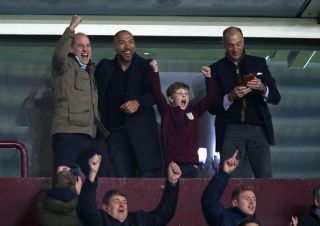 Prince William has explained why he desperately did not want to become a Manchester United or Chelsea supporter.

The Duke of Cambridge supports Aston Villa who just escaped relegation this season.

Villa’s 1-1 draw with West Ham was enough to see the likes of Watford and Bournemouth relegated on the final day of the season, while Norwich City already knew they were going down.

William is a familiar face at Villa Park and we’re sure he will be trying to get back again next season.

But it could have been very difference for Prince William. He could have ended up following United or Chelsea instead.

Speaking to Peter Crouch on his podcast, via BBC, he said: “Only in the last few years have I really got a grip of Villa as my team. I watch them a lot. I get into stats and I watch them every week.

“It was the first FA Cup game I went to.

“It was a Villa v Bolton and I remember sitting in the stands with a beanie on. I must have been about 12 or 11 and I went with a load of mates.

“I sat there amongst all the Villa fans and I loved it. I thought the atmosphere and team ethos was great…

“At the time I desperately didn’t want to support United or Chelsea like everyone else at school.

“I liked the idea that Villa had a real history, winning European cups and stuff like that.

“I felt a real connection with the club, more than I felt watching some of the other ones. Villa felt like a really proud midlands club and it felt very special.”

The man is free to support whoever he wishes and maybe it was just a matter of wanting to be different, yet still going on to follow a respected club. That’s certainly what Villa are and I expect them to improve next season — probably avoiding a scrap at the end of the season like they were unable to this term.

Speaking about his son, George, William admits he would not have a problem if he ended up supporting Chelsea.

He added: “Previously I was a bit concerned about him supporting Chelsea, but now Frank’s come in and I feel the culture’s a bit different at Chelsea and I’d be ok with it. I do like the values and the ethos of the club.

“I want them to look after the players and set a good example to the young fans.

“I want our children, when they go to the match, to come away loving what they’ve seen, enjoying it and seeing their role models behave in a way that we’d all want them to.”

Poor Ole Gunnar Solskjaer – he hasn’t stepped a foot out of line all season, but maybe Prince William enjoyed Frank Lampard telling Jurgen Klopp’s side off for being ‘arrogant’, as per BBC Sport.