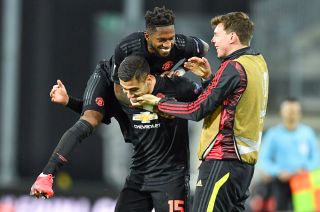 The Premier League season is over, Champions League football is in the bag, and Manchester United’s focus has turned on winning the Europa League.

With a convincing win against LASK (5-0) in the first leg of the last 16 round, the Red Devils will stroll into the quarter-finals.

The draw for the quarter-finals and semi-finals has been done. Manchester United take on either Istanbul Basakeshir or Copenhagen in the next round, and for the semi-finals we could be in the mix to play Olympiacos,Wolves, Sevilla or Roma.

It gives Ole Gunnar Solskjaer some leg room to give his key players a longer rest as we’re sure he will field a team of youngsters and fringe players for the second leg.

In my opinion, we are the favourites to win the Europa League this season. It will be a great way to end Solskjaer’s first full season in charge.

The question I have is who else can challenge United for European glory in UEFA’s second-rate competition?

Inter Milan have already booked their place in next season’s Champions League, so they will be focusing on winning the competition outright, like United. They finished second in Serie A while AS Roma, also left in the Europa League, didn’t have as good a season currently sitting in fifth place.

Bayer Leverkusen need to win the Europa League to get back into the Champions League. Although they can be a threat on their day, the future of Kai Havertz is yet to be solved and he could easily be at a new club when the Europa mini-tournament starts. There’s also an argument that Bundesliga clubs (three left in the competition) have had a longer break from domestic football – their season was complete a month earlier than the Premier League.

We will also need to be wary of Sevilla, who secured a Champions League by finishing fourth — equal on points with third place Atletico Madrid (4+ better goal difference).