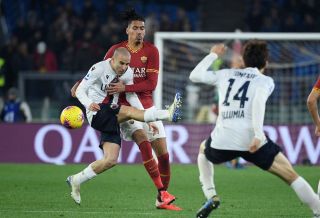 Unlike the Premier League, UEFA does not prevent players on loan from competing against their parent club. Consequently, with both AS Roma and Internazionale looming as potential roadblocks to a Europa League title in August, Manchester United discovered an unexpected friend in the novel coronavirus.

Last summer, the Reds loaned defender Chris Smalling and forward Alexis Sanchez respectively to the Giallorossi and Nerazzurri. The pair struggled both late in Jose Mourinho’s tenure and following Ole Gunnar Solskjaer’s arrival. Subsequently, the Norwegian sanctioned their loans to Serie A where both thrived in new environments.

Solskjaer was happy to let Smalling go given the former Fulham man lacked confidence with the ball at his feet. Sluggish and hesitant, he didn’t fit well into United’s new ‘play out from the back’ scheme.

Ironically, he found his footing in Paulo Fonseca’s rearguard doing exactly that while also contributing two goals and two assists at the other end. No one in the Eternal City forgets his name as Louis van Gaal notoriously did with the player sitting beside him no less. Mike Chris is happy at the Stadio Olimpico, the 30-year-old apparently eager to make his loan permanent.

If Ole was chuffed to get Smalling out from underfoot, ecstatic relief might best describe his emotion upon finding a party interested in his not so red hot Chile pepper. In 45 appearances totaling 2,781 minutes, Alexis Sanchez logged only five goals and nine assists with United. One direct goal involvement every 198 minutes, and I’m being kind by rounding down, wasn’t what Jose Mourinho or Reds faithful thought they were getting from their £350k/week acquisition. They were paying much less to Henrikh Mkhitaryan, who went the other way in a swap of disaffected stars with Arsenal, to be equally unproductive.

Like Smalling, however, Alexis rediscovered himself in Italy. In less than half the minutes (1,315) at the Giuseppe Meazza, the erstwhile Gunner, Barcelona and Udinese star matched his 14 United goal contributions (4G/10A), involving himself in an Inter strike every 94 minutes on average.

Both loan deals expired in June, although United agreed to extend each through the end of the Serie A campaign. Roma close out their campaign against Scudetto monopolists Juventus on Saturday. Guaranteed to finish either fifth or sixth, I Lupi know they’ll be in the 2020/21 Europa League. Inter conclude their season against upstart Atalanta with Champions League football assured but their slim one-point advantage over La Dea transforms the contest into a battle for second place.

When the season wraps, managers Paulo Fonseca and Antonio Conte will focus their squads on the Europa League. Unlike United, Roma and Inter must complete both legs of their Round of 16 ties against Spanish sides Sevilla and Getafe. Moreover, they must do so without Smalling and Sanchez.

United were content to extend the pair’s loans when COVID-19 disrupted football across Europe but saw no reason to gift potential opponents with impactful players who, in a match against the Reds, might feel they had a point to prove. Thus, the club elected to take a moment deciding whether to recall or sell their exiled players. One expects that moment will last as long as each Italian club remains alive in the continental competition.

Will that tactic disrupt other business, such as the much rumoured negotiations to acquire Jadon Sancho from Borussia Dortmund? Why should it?

United will be happy to sell Smalling to Roma once he is no longer a threat to their trophy hopes. Valued at £14.4 million (Transfermarkt), any fee they glean from Roma for the 30-year-old will likely be reinvested in acquiring a younger centre-back to provide better coverage than Phil Jones and Eric Bailly currently provide for Harry Maguire and Victor Lindelof.

Despite his resurgence and the £30.6 million evaluation United attached to Sanchez’s transfer from Arsenal, Transfermarkt rates him as Smalling’s equivalent in cash terms. At best, he represents a small subsidy in relation to any Sancho deal. In addition, Solskjaer is almost certainly delighted to sanction Alexis’ permanent move to Inter at any price despite joking to a reporter that the twice-Copa America champion may return next season and prove his Mancunian doubters wrong.

For his part, Inter boss Antonio Conte reportedly wants Sanchez to remain in Milan and is willing to send winger Ivan Perisic, currently on loan to Bayern Munich, in exchange. Yet, the right player or amount of money may not be the critical factor in closing a deal (when the time is right). The Chilean’s astronomical wages represent an insurmountable wall for the Italian club. If he wishes to remain in Italy, Sanchez must accept a significant wage cut.

Regardless of his decision or Smalling’s eagerness to settle his future, United are content to wait for the Europa League to play out. For the world at large, the pandemic is a massive, lethal thunderhead. For the Reds, the darkest cloud turns out to have a silver lining.