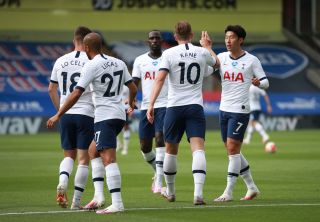 It’s the jump all Manchester United fans want to see under Ole Gunnar Solskjaer, but I don’t think it’s as easy as Merson makes out…

Kane is a terrific striker but there’s no getting away from the fact Tottenham would demand a ridiculous transfer fee. He managed 18 Premier League goals this season despite missing a large chunk of the campaign and he’d make a significant difference to every side in the league.

The England international looked back to his best in the final few games of the 2019-20 campaign — scoring five in three matches.

But unlike Spurs, United will be able to offer Champions League football next season. Writing in his column for Sky Sports, Merson cast his view on how Kane could prove to make all the difference for Solskjaer’s side.

“I think Manchester United need a centre-forward. I really do,” Merson wrote. “And if they put in a massive bid for Harry Kane, they become massive players next season in the Premier League.

“People say Anthony Martial has done great, and he has done well, and Mason Greenwood will be a superstar, but if you can get Kane playing down the middle, with Martial, Greenwood and Rashford rotating, Kane is getting you 20 goals in a bad season!

“Martial is a hot player; when he is hot, he is brilliant. But you don’t win the league. On hot and cold. You win the league on consistency, and Harry Kane brings you that, he’s the best striker in the Premier League.

“He can score out of nothing when things aren’t going well, and United need a natural goalscorer.”

It’s unrealistic to think United will sign Kane this summer. I don’t even think he’ll come up in conversation at the club because their sights on other prime targets.

Odion Ighalo is at the club until January but I would still sign a centre-forward to offer more competition. United should have four centre-forwards going into every league season.