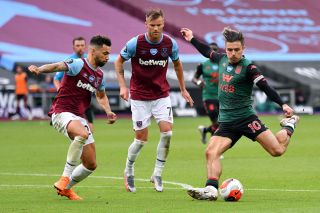 Michael Owen believes Jack Grealish is seeking a transfer to Manchester United after keeping Aston Villa in the Premier League.

Jack Grealish “has his heart set on Manchester United” amid speculation the English midfielder will leave Villa Park this summer, according to Michael Owen.

Striking a deal with Villa has been made more difficult in light of quest to avoid relegation as they won’t need to sell their most prized asset to cushion the financial blow that comes with dropping to the Championship.

But manager Dean Smith could be forced into a decision if Grealish expresses a desire to leave the club. He will then be able to use the funds from a potential Grealish deal to bolster other areas of his team.

Villa will want to build this summer in order to avoid another nervy ending to their season next term.

Grealish, 24, scored as Villa drew with West Ham to secure top-flight stature on the final day of the Premier League campaign.

This season he scored 10 goals and provided either assists across all competitions.

Owen believes the time has come for Grealish to make the move of his career.

“I think he’s after Manchester United as well,” the former England striker told Premier League Productions (cited by The Mirror). “I’m told he has his heart set on Manchester United. I’d be surprised if he went anywhere else.”

Now that United have Bruno Fernandes pulling the strings in midfield, it remains to be seen if Ole Gunnar Solskjaer will be given the funds needed to sign a player who won’t be guaranteed a starting role.

I don’t want to say Grealish would come as a squad player — but Solskjaer is trying to build depth and quality around his squad. This would be a major upgrade on the likes of Juan Mata and Jesse Lingard.