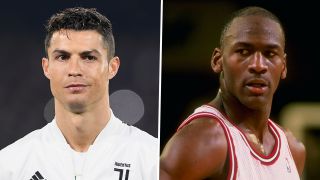 Cristiano Ronaldo is considered to be one of the best players in the history of football.

He’s certainly the best player I have seen wear a Manchester United shirt.

Current midfielder at United, Jesse Lingard, has described Ronaldo as the Michael Jordan of football for his incredible career and winning mentality.

The comparison comes ahead of the restart of the NBA season on 30 July.

Jordan is widely considered to be the greatest all-round player in the history of basketball. He led the Chicago Bulls to six NBA championships (1991-93, 1996-98).

Since Lingard watches NBA and supports the Toronto Raptors, he was asked to pick a footballer whose achievements would compare with those of NBA legend Michael Jordan.

“I have to say Cristiano Ronaldo for everything he has achieved in his career,” Lingard told Sputnik News. “He has played for plenty of clubs and won many trophies. He is the real icon and Michael Jordan of football.”

This season Ronaldo won his second consecutive Serie A title, the 32nd trophy of his career — seven which were league titles in England (3), Spain (2) and Italy (2).

Another player I think is comparable to Jordan that also played for Manchester United is David Beckham. Not just because he was a winner, but his global appeal and branding.

Who do you think the Michael Jordan of football is?

Read more: Opinion: A top three finish should be just a start for Manchester United