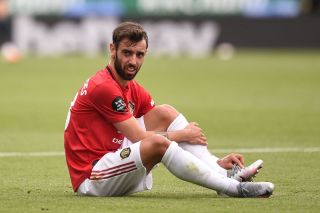 The Portugal international scored in Manchester United’s 2-0 win over Leicester City at the King Power Stadium on Sunday, in a Premier League finale which saw the Foxes’ Champions League hopes buried.

Beating Leicester meant United finished third in the league, qualifying for Europe’s most prestigious tournament as a result, but Fernandes is now focused on trying to win the Europa League.

“Now our focus is on the Europa League because this is a really good trophy and we want to win,” Fernandes told MUTV.

“I came to Manchester United to win trophies. We need to play every game to win. If we go into the Europa League and win every game, we know we’ll win the trophy.

“But we are not happy enough because we know this club and these players, they can bring much more for the club.

“I think we have qualities enough to fight for some titles — more than one title. I think we need to win some trophies and then we’ll be really happy.”

United lead LASK 5-0 from the first leg of their last 16 tie — knowing the quarter-finals and semi-finals will be played as one-legged fixtures.

The Reds are set to face Istanbul Basaksehir or Copenhagen in the next round as part of a mini tournament due to be played in Germany.

“We feel good, it’s what we wanted,” he added after United’s 2-0 win over Leicester. “We trained hard and we worked hard for this moment. We know the only thing we could achieve this season was getting into the Champions League, so we fought hard for that.

“Of course, playing Champions League is always special and I hope it can be with the supporters, that will be more special.

“We deserve to be in the best games, in the best European competition. Nothing against the Europa League, but everyone knows the best competition is the Champions League.”

After arriving from Sporting Lisbon in January, Fernandes made an instant impact at Old Trafford and he will want to replicate and build on what he’s done to date in the Champions League.

It’s important United sign the right players this summer because they should go into Europe next season to win. And not just take part.