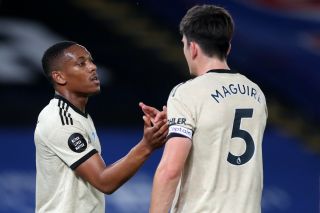 Congratulations Anthony Martial, it’s good to see him get some recognition for the goals he scored this season.

It would be fair to say at the beginning of the 2019-20 season Manchester United fans were still questioning whether Martial would push on and finally become the player we hoped he would after impressing on his 2015 arrival from AS Monaco.

Ole Gunnar Solskjaer had a cracking prospect who José Mourinho couldn’t get to perform on a consistent level. It has been a change of management, squad morale and hard work that’s made the difference.

We used to joke that Martial couldn’t crack a smile. He always looked sulky.

But the mood at Old Trafford has lifted and Martial has had a smile on his face since Bruno Fernandes joined from Sporting Lisbon in January.

Anyhow, there’s another reason for Martial to smile because the Frenchman has been named in WhoScored’s Premier League team of the season (2019-20).

👇 Read the reasoning behind the XI

Martial is the only United player to make WhoScored’s Premier League XI based on their very own ratings. No Manchester City player made the cut.

Whereas in the BBC Sport Premier League team of the year, only Harry Maguire got the nod for United.