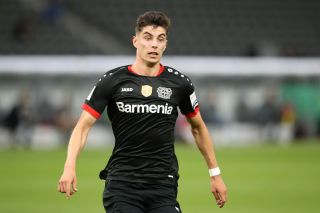 Manchester United qualified for next season’s Champions League by beating Leicester City 2-0 in their final league game of the season on Sunday.

This was enough to see the reported transfer reports accelerate even more.

There is not a day that goes by without Jadon Sancho taking over headline space.

But thanks to The Athletic, we can mark one name off our list because Manchester United won’t be making a move for Bayer Leverkusen’s Kai Havertz as both Ed Woodward and Matt Judge consider the 21-year-old to be too expensive at approximately £90m.

Our so-called loss it expected to be Chelsea’s gain, however, we’ve always been linked closer to Sancho and we were never going to see the Glazers back Ole Gunnar Solskjaer to sign both this summer.

Chelsea are reportedly in pole position to sign Havertz with Frank Lampard believing he can pull the strings to get the best out of Timo Werner and Hakim Ziyech.

A significant update provided by the reliable BILD journalist Christian Falk came after Chelsea’s 2-0 win over Wolves last night, and it was positive news for Chelsea fans.

After qualifying for Champions League: it can now go quickly with the deal of @ChelseaFC and @kaihavertz29. Leverkusen does not insist on participating of @kaihavertz29 in the Euro League. Now the negotations are getting hot

Falk thinks the deal will now move ‘quickly’ and negotiations are ‘getting hot’ after Chelsea booked their place in the Champions League.

Even though Leverkusen are still in the Europa League, Falk understands they are not expecting Havertz to play a role in the remainder of the tournament.

Chelsea getting their business done early!