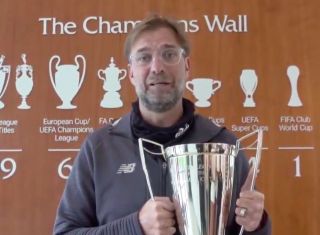 Liverpool manager Jurgen Klopp has described his first interaction with Sir Alex Ferguson as like ‘meeting the Pope’.

Manchester United icon Ferguson announced Klopp as the League Managers Association manager of the season on Monday evening after his Liverpool side ended their 30-year title drought.

The main managerial award won by Klopp is appropriately named the ‘Sir Alex Ferguson’ trophy and the German boss spoke glowingly of the Scottish legend despite the obvious rivalry between United and Liverpool.

Ferguson won 13 Premier League titles during his time at Old Trafford to take United onto 20 league crowns in total, the most of any club in English football.

Klopp acknowledged that it ‘was not 100% appropriate’ as Liverpool boss to lavish praise on a United great, but said he admires Ferguson.  He recalled the time where he met Ferguson for breakfast, saying the pair immediately clicked.

Listen to Klopp recalling his meeting with Ferguson below, via Sky Sports:

🗣"The name is Sir Alex and I know it is not appropriate as Liverpool manager but I admire and love him, he was like meeting the pope" 🤣

Jurgen Klopp on winning LMA manager of the year pic.twitter.com/1yfRnvRk7P