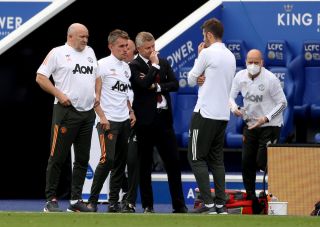 Ole Gunnar Solskjaer is set to be ruthless in jettisoning several senior players from his Manchester United squad this summer.

United secured a third place finish with victory over Leicester City on Sunday, and must now be ambitious in the transfer window in order to bridge the gap on rivals Liverpool and Manchester City.

But offloading players that are not part of the long-term plans takes on as much importance as effective recruitment as Solskjaer looks to refine a squad capable of challenging for the Premier League title.

And according to the Independent’s Miguel Delaney, United are looking to sell ‘about six players’ in the summer transfer window.

Jessie Lingard is mentioned as one of the players that are set to be transfer listed, after the 27-year-old scored his first Premier League goal of the season in virtually the last kick of the campaign.

Lingard has largely been left out in the cold since the restart, only making a handful of matchday squads and struggling to make any meaningful impact.

Phil Jones is another player likely to be moved on, with the forlorn defender playing no part since the restart.

Meanwhile, we do not expect to see Marcos Rojo return to the club ahead of the new campaign. Rojo has been out on loan in his native Argentina at old club Estudiantes and it is highly unlikely that he has a future at Old Trafford.