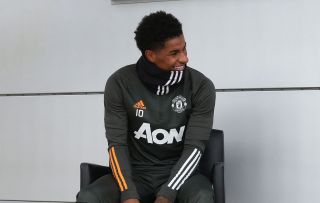 Marcus Rashford has sent Manchester United fans a message of thank you after what has been a difficult season.

Difficult not just for the team and fans (missing out on attending games towards the end of the season due to a global pandemic), but Rashford who sustained a serious injury at the halfway point of the season only to be ruled out for the remainder of the campaign. If it wasn’t for COVID-19 forcing the Premier League to suspend games, Ole Gunnar Solskjaer would have been without one of his main men for a number of important clashes.

This season Rashford has 22 goals to his name across all competitions. That’s a good return for a 22-year-old who missed a chunk of the season, with the latter stages of the Europa League still to play. It gives Solskjaer less reasons to panic going into the transfer market this summer and Anthony Martial deserves a mention too, scoring the same amount of goals as Rashford this term. – Stats via PremierLeague.com

Rashford came back after Project Restart and helped the team turn our season around. At this point he was after forcing the government into a U-turn.

The United forward shared a post on Twitter this afternoon thanking fans for their support and he acknowledged his efforts to come back from a serious injury, as seen below:

5 months ago I would have never believed I would have been able to see this season out. I’m grateful that I have. To the fans, thank you for always getting behind us at a time when it wasn’t always easy. We’re back where we’re supposed to be ♥️ pic.twitter.com/VrsupfEBXs

Rashford will be trying to come back next season a better player, scoring more goals and challenging for the Premier League title, but there’s a lot of work to be done. A collective effort, too, because it’s time for the board to back Solskjaer in the transfer market. The hard work doesn’t stop now.

Especially if Solskjaer is to be given a chance at winning United’s first league title since Sir Alex Ferguson.

I’m not just talking about next season because that seems a stretch, but the manager is working towards something and has delivered Champions League football in his first full season at the club. It’s the least he deserves.