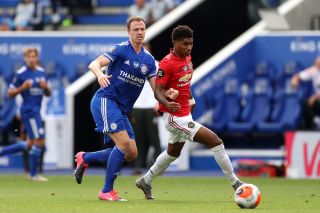 After failing to take advantage of several opportunities before the coronavirus interrupted proceedings, then doing so again by failing to defeat West Ham in the campaign’s penultimate game, Manchester United earned a reputation for dragging out contests during the 2019/20 Premier League season, not to mention the reigns of Jose Mourinho and Louis van Gaal.

The 1-1 draw against another former boss, David Moyes, made the final match against Leicester all the more dangerous. The pressure was still on the Foxes to win, as it would have been with anything but a three-goal United win over the Hammers, but momentum carries a surprising amount of weight for an intangible quality.

Thus, it wasn’t surprising to listen to former United captain Gary Neville worry on Sky as the game remained goalless well into the second half. Even though Leicester were the club who needed to seize the initiative, with victory their only clear passage into the 2020/21 Champions League, G-Nev fretted over the Reds’ lack of urgency. “Will it come back to haunt them?,” he asked again and again, each time recalling how Leicester boss Brendan Rodgers had told the Sky Broadcast team he hoped to be on level terms at the second-half drink break, at which point he would summon the kitchen sink.

While Neville didn’t mention Jose or LvG, he blithely assumed current manager Ole Gunnar Solskjaer expected his side to be on the front foot from the off. Based on that assumption, the Class of ‘92 graduate focused on fellow Carrington alumnus Marcus Rashford. United’s No.10 repeatedly hung back on the left flank. Rather than stretching Leicester’s suspect defence, the Wythenshawe lad repeatedly held the ball just inside the Foxes’ half, spraying passes across to Aaron Wan-Bissaka, speculatively into lanes for Anthony Martial or conservatively laying off to Nemanja Matic and Harry Maguire.

“Why?” the United legend wondered. Leicester’s best defender, Caglar Soyuncu was suspended. Jonny Evans (32) and Wes Morgan (36) made for a Statler and Waldorf pairing in central defence. Rashford also needn’t worry about defending the Foxes most dangerous right wing-back, Ricardo Pereira, who was injured. So was Brendan Rodgers’ most creative attacking midfielder, James Maddison. Combined, those absences suggested United could risk taking the front foot and seek an early lead.

On the other hand, there is a reason Neville returned so chastened from Valencia in 2016. Tactics aren’t his strong suit.

While it’s well known the Reds are most effective in counter attack, a major reason they enjoyed so much success against top six rivals this term while struggling against sides who play a more Reg Varney style of football, Leicester isn’t a possession-based side like Manchester City or Arsenal, one you can’t afford to sit back against while absorbing relentless pressure. Like United, they’re more likely to hit you on the counter. Can you say Jamie Vardy?

If that’s the case, why adopt vertical tactics? Why not slow things down, keep the match in front of you, and see if maybe, just maybe, you can patiently lure Messrs Evans and Morgan out of position? At worst, you can exploit their desperation later in the match when they are forced to gamble.

In the end, of course, that is what happened. Hamza Choudhuri felt the urgency to move the ball up the pitch, tried to pull an ill-advised 180 on Mason Greenwood deep in his own half, was caught out and dispossessed, leading to Bruno Fernandes’ seemingly solitary accurate pass on the afternoon.

Gary Neville and Martin Tyler continually reminded viewers that one Jamie Vardy touch could put Leicester into the Champions League. In perhaps his worst performance in a United shirt, with every pass frustratingly finding a blue shirt, a single touch from Bruno did the same for United. His through ball split Statler and Waldorf, forcing both into rash challenges on Anthony Martial. Like Gary Anderson at an all you can eat buffet, referee Martin Atkinson had his choice of penalties to award.

Criticising Rashford, as Neville and many in United social media forums did, missed the point. He followed the manager’s tactical plan, not pushing into the final third and allowing Marc Albrighton to play as part of a back five. Instead, Bruno continually ran into the empty space, drawing more sprightly nephew James Justin away from his two uncles in central defence. That Rashford’s reluctance was, in fact, intentional should have been obvious when Greenwood split Evans and Morgan in the first half only to sky his header well over the bar.

Before the match, Ole Gunnar Solskjaer and his staff looked at Brendan Rodgers’ limited resources in defence and midfield. They could have licked their chops and gone for the quick kill but that strategy plays into Leicester’s counterattacking strength. Instead, they realised the Foxes couldn’t hurt United through a slow buildup, so why help them?

Sometimes, as American general George Custer and his Ninth Cavalry learned, rushing headlong into battle is suicide. Occasionally, the waiting game pays off. For United, the payday not only includes restored status and increased revenue from participating in next season’s Champions League, it also rules out the need to rebate millions to club sponsors for failing to qualify in successive campaigns. The club can now afford a few upgrades to the squad before the 2020/21 Premier League season kicks off on 12 September.

All because the manager instructed his fleet-footed winger to let the ball do the work for a change.