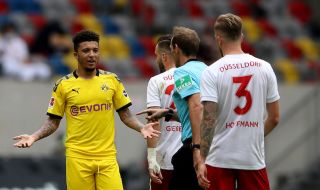 According to reports in Germany, Manchester United have seen an opening offer of €98m (£89m) to sign Jadon Sancho rejected by Borussia Dortmund.

German publication BILD reckon Borussia Dortmund are holding out for €120m (£109m) to sell the England international, who looks set to return to the Premier League if Ole Gunnar Solskjaer has his way.

Borussia Dortmund’s CEO Hans-Joachm Watzke made it clear last month that there would be no discount on Sancho — financial implications or not — to ensure that any interested club must meet their demands (via Metro).

So, this is shaping up to be another lengthy one but the transfer window officially opens today for 10 weeks. Solskjaer needs to push to get the deals he wants over the line as soon as possible.

The Premier League season kicks off in September and he will want his main signing part of the squad by then. It doesn’t give United much time but with Champions League football now in the bag there can be no excuse for incompetence.

United have been using Bayern Munich’s Kingsley Coman as a negotiation tool, which we brought to you in a report over the weekend.

BILD’s report has been cited by the Daily Mail.