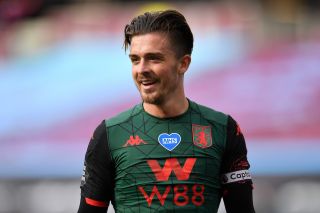 Manchester United look set to push ahead with their ambitious transfer plans after ensuring Champions League qualification with a 2-0 victory over Leicester City.

Ole Gunnar Solskjaer must strengthen his squad this summer and United’s targets could only be truly finalised after the club learned their fate about which European competition they would be playing in next season.

According to the Independent, Solskjaer is now planning on a busy summer at Old Trafford, with Borussia Dortmund starlet Jadon Sancho and Aston Villa captain Jack Grealish both prioritised as key targets.

The report claims United are expected to complete the signing of Sancho in the ‘coming weeks’ and will then turn their attention to Grealish.

Sancho, 20, is one of the most exciting players across Europe right now and United’s interest in him has been widely documented.

And despite the fact Dortmund and United are ‘£10-15m’ apart in their valuations at this stage, the Independent’s report suggests that all parties are confident that a deal can be concluded.

Grealish, meanwhile, scored a crucial equaliser that helped to keep boyhood club Villa up in the Premier League but focus has swiftly turned to his future.

Villa are likelier to demand a higher fee for their talisman after securing their status in the top division, and the report notes that this could be a stumbling block in the proposed transfer.

Solskjaer was said to have cooled his interest in Grealish before lockdown, but has reevaluated the situation since Project Restart and now sees the importance of enhancing his stretched squad.