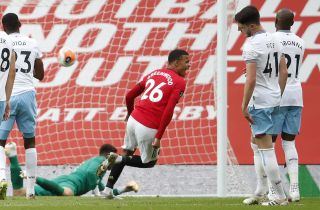 Here are our best Leicester vs Manchester United predictions for this weekend’s Premier League finale at the King Power Stadium.

The Premier League comes to an end on Sunday afternoon — and United have a chance to get a Champions League spot whilst holding the key to third place.

Leicester sit fifth in the league table, just one point behind United and Chelsea, and Brendan Rodgers’ men know exactly what’s on the line. Teams like this lose key players for failing to qualify for the biggest competitions and although that probably won’t happen Leicester this summer, it will unless they find a way back into the Champions League in the coming year or two.

All odds (via bet365) are correct at time of publishing and subject to change, but you can also find the best bookmakers reviews on freebets.uk website.

The first of our three best bets for Sunday’s game is a Manchester United win @ 6/5.

This is a decent price given Leicester looked a certainty to finish in the top four before the restart. Their form has been poor ever since and it hasn’t helped that Rodgers has so many key players out injured. The Reds cannot pass on this opportunity with Leicester managing just nine points from a possible 24.

Last time out they were beaten 3-0 by Tottenham Hotspur which makes them lucky to be in the position they’re in — one win away from Champions League qualification.

It’s a must win for United too, and I expect them to bounce back after disappointing performances and results against Chelsea and West Ham.

There should be goals in this game too, so I’d be taking a look at over 2.5 goals @ 10/11. These two teams have scored 131 times between them with Leicester having the joint third best record after scoring 67 times (three more than United).

Leicester look suspect when it comes to defending — not only conceding three against Spurs but four against Bournemouth on 12 July. On the other hand, United have not been solid at the back since the restart. Anything but!

Regarding Jamie Vardy, he is nominated by Betfred to be the top goalscorer this season with odds of 1/16. This game is his final step before conquering the well-deserved title and bookies are behind him with full support. Rodgers also recently said Jamie Vardy is one of the best strikers in the world and he’s up against a pretty shaken defender this weekend, so we’ll see if words of encouragement help the England international.

Finally, I fancy Mason Greenwood to get at least one of those goals and the in-form youngster can be got to score anytime @ 7/4.

The 18-year-old can’t stop scoring goals at the moment and we fancy him to finish the season on a high. He is building a formidable partnership alongside Marcus Rashford, Anthony Martial and Bruno Fernandes which could cause problems for the Foxes on Sunday.