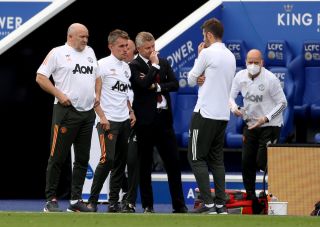 Vertonghen’s temporary contract extension has come to an end, ending an eight-year spell at the club after Harry Kane took to Instagram to wish the former Ajax player the best with the next stage of his career.

The 33-year-old also confirmed his departure on Instagram earlier this morning.

My initial thought was a move to either Italy or Spain could be on the cards for the Belgium international, which I later spotted in a report via Calciomercato. I can imagine there will be a number of clubs interested in him on a Bosman, but United should steer clear.

However, Jenas has claimed that the Spurs defender could be an attractive option for United this summer, as though we need another defender who has suffered with muscle injuries…

The 37-year-old said Vertonghen would be able to build a formidable partnership with Harry Maguire.

Speaking to BBC 5 Live Sport (as cited by Football.London), Jenas said: “I keep touting him around everywhere but I’m sorry, Jan Vertonghen on a free is the best free transfer centre half out there.

“If you can get Harry Kane back on the right side and get an actual ball-playing centre-half as a left-sider, that little dynamic may change things for them as well as he’s free.

“They’ll know what they’re doing, they’ll have a plan but defensively they’re miles off it.

“I know how good he is. It baffles me when I see him in the stand every week because I know good this player is.

“I’ve played with him, I’ve watched him and on a free transfer, it just makes perfect sense.”

United still have defensive problems and Vertonghen is a better defender that many we currently have at the club, though at 33 I really think Ole Gunnar Solskjaer will be looking elsewhere.

Vertonghen will probably end up playing in Italy — trying to win a few trophies before he hangs up his boots.