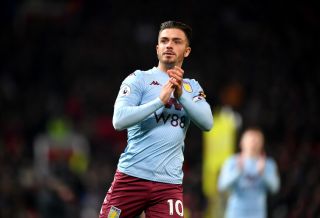 Grealish helped his boyhood club avoid relegation on the final day of the season with a crucial goal away to West Ham.

But he has been largely expected to leave Villa Park this summer and United have been credited with an interest in the playmaker’s signature.

As reported by the Independent, Solskjaer has reignited his desire to sign Grealish after interest in the 24-year-old initially cooled.

The report claims the United boss changed his mind on the club’s need to secure his services after his over reliance on the first-team after the restart.

But the Independent’s report also suggests the asking price would be a potential stumbling block that could scupper the move.

And according to the Mirror, Villa’s obstinate co-owner Nassef Sawiris will not let the club captain go for a fee below £80m.

Grealish is a tremendous talent and would improve United’s creative options greatly, but the club will surely baulk at that asking price if there can be no negotiation.

Solskjaer’s transfer budget will inevitably be limited this summer due to the financial restraints caused by COVID-19, and other areas in the squad also need to be prioritised.

We cannot envisage a scenario where Grealish arrives at Old Trafford for £80m alongside Borussia Dortmund star Jadon Sancho who would possibly cost even more.

Sancho is a versatile attacker with world-class potential that can take United’s attacking options up to the next level next season.

As noted by BBC Sport, Sancho is a leading target this summer, and we think the 20-year-old should take precedent in United’s transfer plans as Solskjaer looks to accelerate his rebuild.