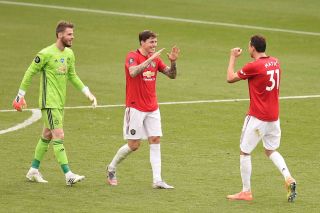 Manchester United goalkeeper David De Gea completed a remarkable feat which may have gone unnoticed in the 2-0 victory over Leicester City which ensured the Reds finished in third place in the Premier League.

The defence has been the platform United have built upon to finish the last 14 games of the Premier League season unbeaten and the Reds recorded yet another clean sheet on their final day showdown.

As noted by the club’s official website, De Gea surpassed Peter Schmeichel as the United ‘keeper with the most clean sheets in the league (113) with his clean sheet against the Foxes.

De Gea has come under scrutiny in recent weeks and much of the criticism in the aftermath of his horror-show in the FA Cup semi-final against Chelsea at Wembley was understandable.

Large sections of the fanbase have now began to question whether Solskjaer should trust the Spaniard to be his long-term number one.

But this incredible statistic is a timely reminder of just how good De Gea has been as a whole in his nine years at Old Trafford.

De Gea won four Player of the Year awards in five seasons between 2013 and 2018 and his recent dip in form should not define his United career.

READ MORE: Barcelona interested in signing Man Utd star who has fallen out of favour with Solskjaer