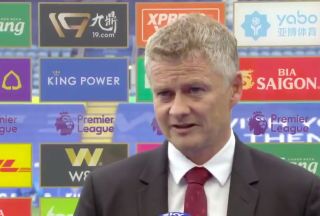 Manchester United manager Ole Gunnar Solskjaer has spoken after his side’s most crucial domestic win in recent history after the Reds beat Leicester City 2-0 at the King Power Stadium.

The Reds faced off this afternoon against impressive fellow top-four rivals Leicester City in a game which decided who would be playing in next season’s illustrious Champions League.

After goals from Bruno Fernandes and Jesse Lingard sealed United’s European fate next season, Solskjaer has hailed what he describes as a ‘wonderful achievement by everyone’.

Solskjaer’s United found themselves slap bang in the middle of the Premier League table before going on a 14 game unbeaten run which has seen their fortunes turnaround and will now compete alongside Europe’s elite next season.

🗣 “We’ve had ups and downs, its a wonderful achievement by everyone”

Ole on the achievement of finishing 3rd this season pic.twitter.com/1nT588eBVF