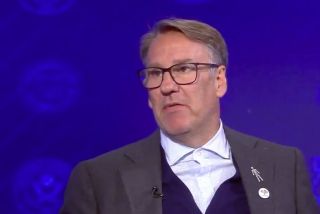 Ole Gunnar Solskjaer must bolster his attacking options in the upcoming transfer window, regardless of the outcome of this afternoon’s winner-takes-all Champions League showdown against Leicester City.

Anthony Martial has delivered as United’s main striker this season, netting 22 goals in all competitions this season.

But Arsenal great Merson thinks Solskjaer should go all-out for the proven and prolific Kane if United’s finances allow him.

Merson suggested a deal for Kane at a sum of £120m would be a no brainer for the Reds to complete as they look to accelerate their rebuild this summer.

He also noted that the United should look to sign another centre-half in the transfer window.

We think a move for Kane is idealistic and we can’t see Tottenham letting their star man go, even if United offer the huge feee mentioned by Merson.

Instead, United should prioritise spending their funds on a versatile forward in the mould of Borussia Dortmund sensation Jadon Sancho.

Listen to Merson’s views below, via Sky Sports:

Paul Merson on where Manchester United should spend their money this summer pic.twitter.com/9wxE3kxfs4