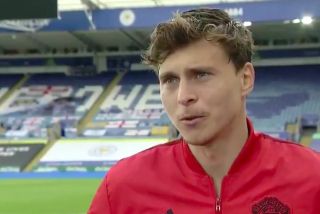 Victor Lindelof put in an immense man of the match display as Manchester United secured Champions League football with a 2-0 win over Leicester City at the King Power Stadium.

The Swedish international didn’t lose one aerial battle throughout, and ended the match with 100% tackle completion.

Relief appeared to be the overriding emotion at full-time, as Lindelof admitted United were not at their best in a nervy performance.

Second-half goals from Bruno Fernandes and Jessie Lingard ensured United finished third place in the league, a position that appeared improbable during United’s disastrous run around the Christmas period.

Ole Gunnar Solskjaer and his side deserve huge credit for finishing their final 14 league games unbeaten, and will have a chance to finish their season off in style when the Europa League resumes in two weeks time.

Listen to Lindelof’s post-match thoughts below, courtesy of MUTV: