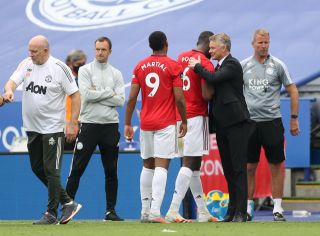 Manchester United got the job done at the King Power Stadium today with a 2-0 win over Leicester City.

Two second half goals guaranteed United a place in the Champions League next season, with Bruno Fernandes scoring from the spot before Jesse Lingard came off the bench to secure three points with our second goal.

Below are three observations from United’s hard fought 2-0 win over the Foxes.

We’re back in Europe’s most prestigious competition after finishing third in the Premier League. Brendan Rodgers will be gutted because Leicester looked nailed on to finish in the top-four at one stage this season. But at the same time, I don’t think it should have looked this hard to make top four, given summer investment and keeping Paul Pogba and David de Gea, and looking at it now third place is about as successful as it was going to get in the end. United should still be going all out to win the Europa League.

Our Portuguese Magnifico looked shattered again today but played through it — and scored an important penalty to open the scoring. This again proves he’s one of the first names of the scoresheet because Solskjaer trusts him even when he’s not showing the best form. I think he’s been magnificent since joining in January, a real pleasure to watch, and I can’t wait to see him playing in the Champions League!

Direction of journey going in one direction: upwards

I know there will be fans who are yet to be fully convinced by Solskjaer. I don’t know how far we’ll get with him in charge but I’m pretty happy with how things are going. We are a team in transition but we’ve still qualified for the Champions League, which was his job when the season started. I hope he enjoys an expensive glass of red later. 🍷