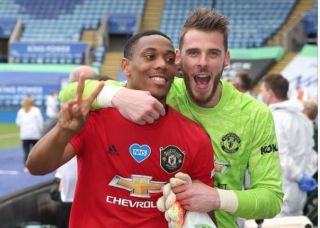 Manchester United will be playing in the illustrious Champions League next season after beating fellow top-four contenders Leicester City earlier this afternoon.

In a game which had huge significance in which side would be joining Manchester City and Liverpool in next season’s Champions League competition, United knew avoiding defeat against Leicester City would be enough.

Despite being a cagey and tension affair Ole Gunnar Solskjaer’s Reds came out on top in a victory which sees his side finish third place in the Premier League; their highest finish since Jose Mourinho’s 2017-18 second place season.

After today’s game, the United squad have been snapped celebrating their European qualification achievement with smiles all round!

📸 Manchester United players are celebrating their qualification for the Champions League.#LEIMUN #MUFC 🔴 pic.twitter.com/Y6Vc60IbNB