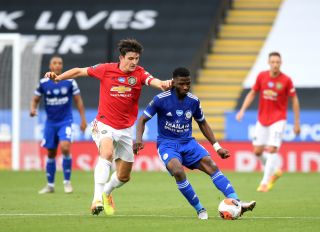 Manchester United and Leicester City are currently embroiled in a crucial Champions League decider at the King Power Stadium. The game is on a knife edge as both sides go onto the half-time break level at 0-0.

United have looked the slightly better of the two offensive sides, however, failure to connect their passes together has prevented the Reds from opening the scoring.

Despite United’s first-half attacking prowess, Brendan Rodgers’ Foxes have looked bright when presented with the chance to break.

Leicester’s finest moment of the half came when Iheanacho broke free of Paul Pogba in the middle of the pitch and found himself in a position where his side were three against two. Thankfully for United, the Nigerian scuffed his shot which allowed keeper David De Gea to collect the ball.

At the opposite end of the pitch, United’s best moment came when Pogba played a delightful ball over the top and into the path of the onrushing Bruno Fernandes. Despite the Portuguese midfielder finishing the chance off, upon closer inspection, it was clear he was well offside and as such, the goal was ruled offside.

At the turn of half-time, United fans have taken to their social media to express their thoughts on the performance:

The quality of our football doesn’t belong in Champions League. We are a Europa league team to be honest. #mufc

No urgency at all. You wouldn’t think we was playing for champions league football. Come on United!! #mufc

A dull first-half at the King Power Stadium, both teams have had chances but the game remains level at the break.

Rashford looks lost at times and Justin is finding too much space for the hosts.#LEIMUN | #PL

Wake up united ffs, piss poor half that. Leicester without quite a few 1st team players and if we up the tempo we’ll get the breakthrough it ain’t rocket science!!!!! #LEIMUN #MUFC

Doing ok, if we really go for it there’s goals to be got, can understand the nervousness, come on lads only 45 mins to go #MUFC

I’m gonna have a heart condition and wrinkles by the time the 2nd half ends.#MUFC