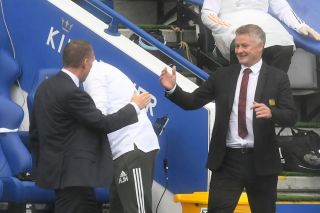 Manchester United fans are delighted knowing they will be back in the Champions League next season, when hopefully we will all be allowed to attend games again.

There was a huge sigh of relief after beating Leicester City at the King Power Stadium. Two goals and a clean sheet as Bruno Fernandes and Jesse Lingard got their names on the score sheet.

We can now reflect positively on Ole Gunnar Solskjaer’s first full season in charge. The team has gone forward in terms of performance levels, and next season we will get to challenge against the best teams in Europe.

Solskjaer has had questions over his ability as a manager since he became interim boss. He got his men to tackle the task at hand and grabbed a season-defining win.

Here’s how United fans have been reacting to the win and being back in the Champions League, on Twitter:

Rebuild some parts of the squad and go all guns blazing next season. Consistency is key and squad depth. Champions League football returns 🔥

My word!!!! This team will be in end of me. Manchester United fans if you’re excited about the humongous victory
Rt and like this tweet let’s celebrate the win !!! Champions league football is back!!!Sancho is coming Pogba is staying!!!#LEIMUN #MUFC pic.twitter.com/utMzy12uuf

MANCHESTER UNITED ARE GOING TO THE CHAMPIONS LEAGUE 🕺🏽 #MUFC

3rd Place confirmed, in typical fashion we have to go about it the hard way. A pretty bad performance but a win is a win. So happy for Lingard to get what could be a great send off for his boyhood club 😁

Now that Solskjaer has delivered — by meeting United’s main objective to get back into the Champions League, we must pile pressure on the board to back him in the transfer market. It team needs adding too, Solskjaer has already warned that the journey doesn’t stop here and there’s a lot of catching up to do if we’re to challenge for the title anytime soon.

Read more: Video: Maguire singles out one area of United’s game which has drastically improved